Some icons made by Freepik and Smashicons from flaticon.com

This week saw the UK Government publish its plans for Post-Brexit immigration policy. Needless to say, it didn’t go down well with the majority of the establishment in Hospitality. Although there were some people who thought it was an excellent idea:

Then there was an absolute litany of the old guard who, let’s be honest, have profited from an industry based more often than not on a failed business model of unpaid long hours, low pay etc.

to name two, but there are countless examples across social media.

So, here is the crux of this. People are either leaving the industry in their droves or they don’t want to join it in the first place. Why? Because my generation grew on the ‘hard work brings rewards’ mantra – it was expected, virtually demanded.

The Work Time Directive was passed in 2003 and, quell surprise, was largely ignored by hospitality. That was 17 years ago and with the new immigration policy announced this week the sector is floundering around because cheap EU labour now won’t qualify for work visas.

This is the current state of the Hospitality sector right now:

Now in recent years, some chefs have tried to pioneer the 4 day week into UK kitchens and the basic fundamental problem with that is – You are cramming in 5 days work & hours into 4, so your 12 hour day becomes a 15 hour day – Genius.

So how do we change this?

Well, Fred Siriex seems to have a plan, posting on Instagram: 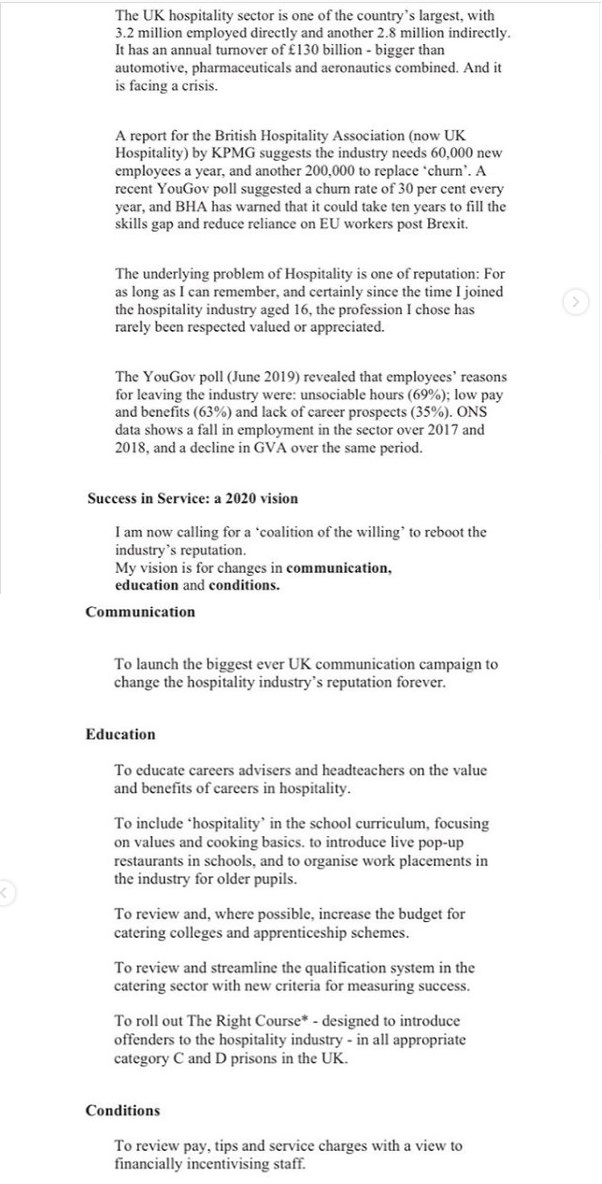 So in spite of using a YouGov survey which tells the industry why people are leaving (69% rubbish hours, 62% Low pay), the best Fred can come up with to help solve this is to actually what is already legally required regarding tips & service charge – Brilliant, why didn’t I think of that?

As per usual, people like Fred want to lay the blame for the industry’s woes elsewhere, Education is the usual scapegoat – As the husband of a teacher, I invite Fred to come and say that to my wife’s face & then I’ll stand by idly as she verbally knocks seven shades of sh!t out of him on what the reality of education is right now – Give me a call Fred, I’ll line it up, my number is on the contact page. Before you do Fred, I advise you read this first: chef.lol/problem

The long and short of this is that the industry is well and truly f*cked. Years of abusing staff and their good nature has now landed it in a place where its hand has been forced and the employment well is about to dry up.

We use cookies on our website to give you the most relevant experience by remembering your preferences and repeat visits. By clicking “Accept All”, you consent to the use of ALL the cookies. However, you may visit "Cookie Settings" to provide a controlled consent.
Cookie SettingsAccept All
Manage consent

This website uses cookies to improve your experience while you navigate through the website. Out of these, the cookies that are categorized as necessary are stored on your browser as they are essential for the working of basic functionalities of the website. We also use third-party cookies that help us analyze and understand how you use this website. These cookies will be stored in your browser only with your consent. You also have the option to opt-out of these cookies. But opting out of some of these cookies may affect your browsing experience.
Necessary Always Enabled
Necessary cookies are absolutely essential for the website to function properly. This category only includes cookies that ensures basic functionalities and security features of the website. These cookies do not store any personal information.
Non-necessary
Any cookies that may not be particularly necessary for the website to function and is used specifically to collect user personal data via analytics, ads, other embedded contents are termed as non-necessary cookies. It is mandatory to procure user consent prior to running these cookies on your website.
SAVE & ACCEPT
error: Content is protected !!